Nymphaea "Garry Wagner" was hybridized last year by Mike Giles and is exclusively available at Lilypons Water Gardens.
Creating a purple waterlily that can survive colder winters has been a goal for waterlily enthusiasts for many years.
Back in 2012 our own Richard Koogle visited Mike Giles at his farm in West Virginia. They talked about the progress Mike had made in creating a purple or blue hardy lily and we're absolutely thrilled that his hard work has paid off and we're honored to be able to offer this lily.


Hybridization is the process of crossing existing lily varieties to create a new one. This is often done by manually pollinating flowers of one variety with pollen from a different variety, and then harvesting the seeds from those flowers. The plants grown from those seeds are then selected out based on whether they show the desired characteristics, and those are then crossed again until the resulting plants reliably produce the new unique look.

Hybrids can also occur naturally. An example of this is Nymphaea 'Lemonade', which was discovered at Lilypons by one of our employees, Greg Barton, in 1996. We cultivated it for the next 8 years until it could be propagated consistently.

The "Garry Wagner" is not the only purple hardy that we sell. A few years ago we added Nymphaea 'Purple Fantasy', hybridized by Florida Aquatics Nurseries to our collection.

That said, the "Garry Wagner" will forever be our favorite because it is named in honor of a man who was a lifelong member of the Lilypons family.
Garry Wagner was an employee at LilyPons for 53 years, from 1963 until his passing in 2016. He was a pond maintenance expert who for decades took care of the ponds of many of our customers.
He also did much of the maintenance of the grounds at Lilypons.
He was a kind man with a passion for the outdoors and loved hiking the Appalachian trail.

We all miss him terribly and it seemed only fitting to ensure that his name be forever tied to the ponds he loved so much.

Dealing with the cold

By all standards this winter has been downright balmy. In fact, I wouldn't be surprised if the last few nights were among the coldest we've had all year - and we're only a week away from spring.
Oh, and they're calling for a foot of snow tomorrow.

Inspired by the cold, and the fact that to me hibernation sounds like a perfectly reasonable way to spend the winter, I wanted to look at how the critters that live in our ponds survive the cold.

For many of us water gardeners koi and goldfish are an important addition to our ponds. They add to both the aesthetic and entertainment value, and since they can life for many years, we can get quite attached to them. This is why it's good that these fish are able to survive even the colder winters.
Key to their survival are the unique properties of water.
Most substances get gradually denser (and thus heavier) as they cool down and turn from liquid to solid, but water is an exception to this rule. It reaches it's highest density at 40℉. If it cools down further it will expand again. This is why ice floats and why even in the middle of winter there can be a pocket of 40℉ water in the bottom of the pond, assuming the pond is deep enough.
Fish can exist comfortable in that bottom layer for several months, since they're coldblooded and their metabolism slows down to the point where they require little to no food.

Fish death can still occur during the winter if the surface of the water remains covered in ice for too long. If there is no exchange of gases (oxygen, CO²) between the water and the air the fish will eventually suffocate.
This is where pond de-icers come in; they create an opening in the ice so the oxygen level in the water can be maintained.

Aquatic frogs, such as the leopard frog and bull frog, also wait out the winter in that pocket of warmer water in the bottom of the pond.
They don't bury completely in the mud, because they need to be able to extract oxygen from the water. Instead they simple rest on the bottom.
Like fish they can suffocate if the oxygen level in the water drops.
Toads and terrestrial frogs hibernate on land, either burrowed into the soil or in places such as leaf litter piles. If it gets cold enough, these frogs may actually freeze, This won't kill them, however, because their vital organs are protected by a natural anti-freeze.

By the way, frogs aren't just for show, they play an important role in your pond. They are a sign that your pond is healthy as they are sensitive to water quality issues. Also, as tadpoles they help keep your pond clean by eating algae and scavenging. 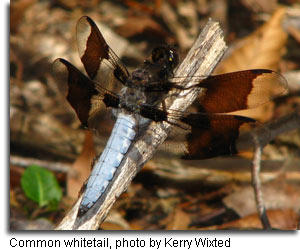 Dragonflies are a welcome addition to any pond as they hunt mosquitoes and other flying insects. These areal predators prefer to survey their domain from a high vantage point, so adding tall plants such a lotus and cattail can help attract them to your pond.
They lay their eggs in the water and the larval dragonflies, called nymphs, are fully aquatic and prey on mosquito larvae and even small fish and tadpoles.

I realize garter snakes aren't thought of as one of the inhabitants of your average garden pond, but they are a common visitor of the display ponds here at Lilypons .

Garter snakes survive the winter by brumating. Brumation is the reptile equivalent of hibernation. It's a slightly different mechanism that accomplishes the same thing - reducing the body's energy requirements to a bare minimum in order to survive the winter. One of the main differences is that brumating reptiles don't actually sleep and they don't live off fat reserves. Their metabolism, heart rate and breathing slow down due to the colder temperatures.
In garter snakes brumation serves a secondary purpose - it triggers the start of the mating season.
To ensure that mates will be available as soon as the weather warms up, garter snakes overwinter in large groups of a few dozen to several hundred individuals.
Their dens can be found in tree stumps, logs or rock piles, and even under man-made structures.
Once the mating season is over, the snakes remain mostly solitary until the late fall.

And when I say as soon as the weather warms up, I do mean as soon as. the photo above was taken on February 24th, when it was 75℉ here in Maryland. Garter snakes are the first snakes to become active in the spring and the last to start brumation in the fall.

I'm going to leave it at that for today. For those in the path of nor'easter Stella; stay safe and warm!

This year Lilypons Water Gardens is celebrating it's 100-year anniversary!

As the water gardening season starts here in Maryland we are excited about our business' future and we reflect on 12 decades of goldfish and waterlilies that let to this momentous occasion.

We will use this blog to post stories about the company's history and to report on the events we have planned for this year to celebrate our centennial.

To everyone who has supported our business over the years;

We couldn't have done it without you and we hope you will join us as we continue to grow our business as your water gardening specialist.

Your Lilypons Family
Posted by Lilypons at 5:10 PM No comments: